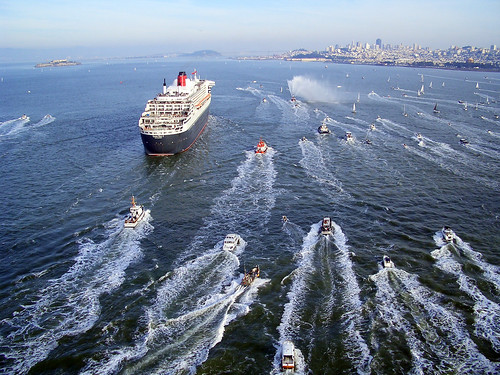 Is it better to turn a large organisation around from the inside, as an employer, or from the outside, as a consultant? For once, the answer might not be in the middle.

This week, I had a wonderful chat with one of the people who has helped shape my thinking about cultural innovation with his optimism and energy, Michael Edson of the Smithsonian. Amongst others, we spoke about the difference between his role as a change agent within a large institution and mine as an outsider trying to turn things around. Which of the two has more potential for significant change?

There’s a lot to say for the insider changing the course of an institution. We just have to consider the work of Nina Simon at the SCMAH or David Fleming at Museum Liverpool. In other sectors as well there are countless individuals changing the course of history (and their organisation) from the inside, just consider Jack Welch or Katharine Graham. Examples of non-C-level change makers are harder to find, mostly because they’re usually not the ones in the spotlights. Every one of us, however, probably knows some people who managed to change the course of their own cultural freighter. I certainly do.

Changing the course and speed of a large institution is a tough and timely job, especially when it’s at full speed. It involves a lot of talking, inspiring, creating allies, educating, taking steps back and looking for another approach… You have to change gear miles in advance and steer when there’s not even a turn in sight. However, when you get a huge institution, like the Smithsonian, even only a couple of degrees more in the right direction, the impact of your work in the long run can be incredible.

On the other hand there’s the Greenpeace approach: Board a speedboat and circle the big ship with convincing arguments and provocative thinking until it has to change direction. Thought leaders like Seth Godin and Brian Solis take this approach, as do tons of independent consultants and small agencies around the world. Unlike Greenpeace, of course, the speedboats are often hired by the big ships to advocate change on their behalf (and/or do the dirty jobs).

As with Greenpeace (and many other NGOs), the best speedboats are fearless, persistent and great at public relations. Also, they’re not in it for the money (although they need some resources to do their work).

So if we’re talking innovation in culture, which of the two – the sailor pushing the big ship or the ‘fundamentalist’ in the speedboat – gets best results? (In other words, should all freelancers enlist or all people on the payroll jump ship, for the sake of cultural innovation?)

I really can’t tell you. In the books I read there seem to be more case studies of insiders turning organisations around, but I wouldn’t be running my own agency (and delivering results) if I didn’t think the speedboat approach wouldn’t work.

I guess it’s only the golden middle road that’s not such a safe bet: halfheartedly changing the course of an ocean liner, either by putting in only some weight from the inside, or taking a speedboat and politely asking for change. Change, in the end, is a decision and not side effect, whether you’re in a ocean freighter or a speedboat.

What’s your favourite position to create change: on board of the big ship or in the speedboat?

Previous post:
Normally, I would never ever have visited your museum Next Post:
Why the Museum of Broken Relationships is so great (and it’s not just the name)
about the author: Jasper Visser