Why success always starts with failure 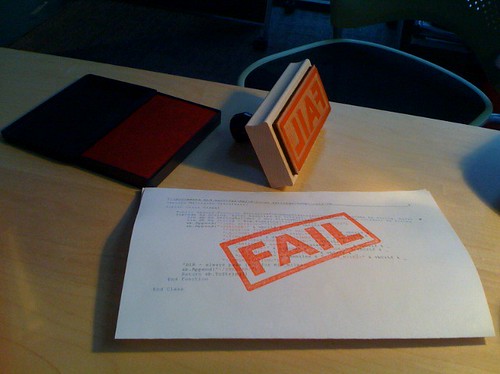 I realise that after my last, maybe unsettling post, I’ve been rather quiet on my blog. I haven’t given up on sharing stuff. I was merely soaking up inspiration and information at TEDGlobal, a conference I think you should attend. Here’s the first of a number of posts inspired by some of the great speakers at that event.

Tim Harford, the undercover economist, advocates a radical change in the way we look at change, leadership, management, etc. His brilliant TED talk embedded below is a nice taster for his ideas, but I definitely recommend reading his book Adapt, or: Why success always starts with failure.

Failure and the need to embrace the opportunity of failing to be able to get ahead is a popular topic at the moment. Certainly, everybody agrees we learn from our mistakes. However, few openly acknowledge they’re ‘just trying something’ in order to get ahead. In any uncertain field (such as building a museum for the 21st century) however, Tim Harford eloquently argues this is the way forward. As he writes “Failure (…) seems to go hand in hand with rapid progress.”

The bottom-line is trail and error. At the moment, nobody knows for instance what strategy will most successfully engage people with cultural institutions on Google+. Rather than copying what we do on Facebook to see what works, and innovating from thereon, applying Harford’s logic we might want to do something radically different. Encourage a wide variety of people with little inside knowledge of the sector (and the tools) to come up with a lot of options, select the best ones and work on from there. Embrace the most unlikely options because in them the greatest leap forward might be hidden.

Why not, like some companies such as Netflix and Mailchimp do, award a prize to anyone who comes up with an innovation that does something previously unthought-of, rather than relying on your own (bureaucratic/9-5ish/exhausted) R&D department?

“Pluralism encourages pluralism. If you want to stimulate many innovations, combine many strategies.” Harford writes elsewhere. To keep cultural institutions relevant in the 21st century, certainly we need many innovations. Only A/B testing to move ahead might simply not be enough to face the enormous challenges. We need to look at innovation with completely different eyes.

I don’t know if success always starts with failure, but I’m ready to believe that.

At a very small scale, a recent experience I had with this was a Facebook ad campaign I designed and ran for xwashier, our local history project. After reading all the blogs and stuff on designing Facebook successful ad campaigns I realised the most important factor for success was sector- and product-specific experience. So I set up a bunch of ads with different completely different specs, picked the best performing ones and made variations on them, repeating this until I couldn’t think about variations anymore (although certainly there were). I don’t know what a perfect Facebook ad looks like, but I discovered a lot of things that don’t work. Also, I managed to get more than double CTR on some of the variations as compared to the (studied) first bunch of ads.

I’m sure that if I had involved more people in coming up with variations, and had studied less of the things experts had written down already, there might have been even better results. And if that applies to a Facebook ad, it certainly applies to something as complex and unpredictable as the future of cultural institutions. To remain relevant in the future, we certainly might want to consider Tim Harford’s radical ideas.