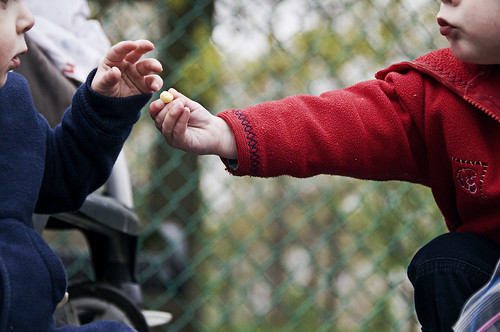 Photo by Ben Grey on Flickr.com

The Decemberists, last Monday in Paradiso, were pretty clear about it: If we didn’t scream at our loudest like we were being eaten alive by a whale, their last song would fail. After a full hour of brilliantly performed music, a theatrical show full of interaction and a decent number of laughs, we were more than happy to. Of course, everybody screamed, the song was a success.

An article in the New York Times advocates kids’ rule of schools. Students aged 15-17 designed their own curriculum, took on individual challenges and were responsible for a self-designed group project. “In such a setting, school capitalizes on (…) the intensity and engagement that teenagers usually reserve for sports, protest or friendship.” Not surprisingly, the kids learned, the project was a success.

Reverse engineer these successes and you’ll see participation and engagement were high because the original ownership (of music, a curriculum) was shared. People usually on the receiving end were made responsible for success or failure. They were given ownership.

It dawned on me today that successful crowdsourcing is all about sharing ownership.

Wikipedia does it, when asking for funds. The Louvre did it with the Three Graces. I’m pretty sure I’ll think about it next time I’m asked to design something for and with the crowd. Sharing ownership, and being honest about it, “We cannot do this without your help.” Let’s see if we can get the crowd screaming.

Previous post:
Inspiration from Foursquare 3.0 to reward your visitors Next Post:
Evil Plans – How we can make culture dominate the world
about the author: Jasper Visser