About crowdsourcing and us 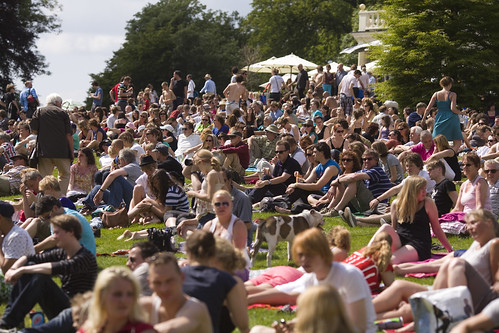 A (our) crowd. Photo by Fred Ernst/Nationaal Historisch Museum.

Lately there’s been quite some talk about crowdsourcing going on around me. Last week a group of students hosted a conference on the topic, called Join to Create, where I spoke. The same evening the heritage institution of the Netherlands hosted a round table where a group of us spoke about so-called “crowdsourced” projects we did. I use quotes because all the discussion made one thing very clear to me: some of the trouble lies in the name and definition.

To me, crowdsourcing is outsourcing to the general public. Your public. From university I remember outsourcing, rather than doing stuff you’re supposed to do yourself, is cheaper, faster, easier, more flexible and “the future”. Crowdsourcing definitely is not all that, but it has its benefits for any organisation. It’s a way to engage the audience, a way to tap into communities, discover hidden knowledge and – yes – it’s a marketing tool.

I don’t really care about definitions. Leave them to the dictionary. I care about involving people in the processes that matter to them. As a cultural institution, to me that means involving the people in designing and doing stuff that is culturally relevant to them.

The other day I was asked for a magazine to write down a thing or two about the importance of crowdsourcing for the Museum of National History, my employer. I understood this question as why we give the audience a voice in so many things we do. The bottom-line is, I think, because we have to as a 21st century museum. The more elaborate answer and a not-so literal translation of my response is this post.

I work following a vision written down by my directors in 2008. Among many insightful things it states that our museum will allow every person to add his or her own history. There is, I believe, a good reason for making this part of our vision. Our task is to increase the historical awareness of the people and to do so we believe we have to stimulate their historical imagination. History, to most people, is a very abstract concept. They can relate to their village and their grandparents, but anything earlier or further away is meaningless. Dates and objects won’t help much in that case.

When you ask people to share their story, however, you have a starting point for a conversation that can lead to more historical awareness. From their story, their thoughts or ideas, their contribution, you can start a journey together that is both relevant to the person who told it, as can tell about history.

To give an example, our project the National Vending Machine asks people to add the object they consider typically Dutch, their reason why and – preferably – a personal story. We, then, engage other people with these objects and stories to discover what they think. By doing this over a long period of time, at different places all over the country, we build a collection of objects and stories. This is crowdsourcing, in a way. However, as I will explain in an upcoming Museums and the Web paper, I prefer to see this as placing the audience the heart of what you’re doing.

Another example is our new website. It contains thousands of stories and other historical information. We encourage our visitors to contribute to them. However, we do not aim at becoming another Wikipedia. We try to use the “wisdom of the crowds” not to reach some sort of generally accepted consensus. Rather, we focus on the many different perceptions of thing. One event can have a thousands different stories, and each and every one of them can be used to make history relevant to people. We try to be more of the discussion page most Wikipedia articles have.

One typical reply I get when I talk about crowdsourcing is that involving the crowd results in mediocre end products. Consensus. Crowdsourcing, however, does not have to be a democracy. Even massively visited projects such as YouTube Play that come close to a democratic process result in exceptional products, when well designed. A small, focused community project therefore stands little chance of giving mediocre results and instead will often bring unexpected things. Whenever we involve the crowd, we design to make their pluriformity count. The number of wonderful anecdotes to prove this is a successful approach grows with the day. Especially when we go out to involve people in our activities, rather than to wait for them to show up on our websites.

We involve the crowd in a lot of the things we do. However, we always think carefully about their possible roles. Will they provide the building bricks for a greater story, be curators, a source of inspiration…? Our role is often that of a platform provider, a moderator or a coach. From the experiences with the National Vending Machine and other project we ran, I realise the crowd is at its best when you invest a lot of time in them, individually. Also, working for a trusted institution, we take moderation very seriously. This does not mean everything has to be the objective truth. It means everything needs to have a certain quality and at least be related to whatever we’re doing. This keeps the discussion between the members of the crowd away from formalities and has them focus on the contents.

I realise that because of my enthusiasm about engaging people in projects I am sometimes seen as a big advocate of crowdsourcing. I’m not. A typical misconception of a lot of people is that crowdsourcing is a solution to all problems cultural institutions face. It’s not. When designed and executed rightly in some cases crowdsourcing can be a great tool. But you’ve got to be ready for it. If your organisation cannot reply to a tricky question sent to the info@ inbox within a day, you’re probably not yet ready to have thousands participate in what you’re doing.

The discussion that is going on at the moment about crowdsourcing in cultural institutions, at least in the Netherlands, is a good one. Most of all, I believe, because it’s about (re)defining our relationship with our audience. How much are we willing to involve them in what we’re doing? What makes us, as a museum/library/archive different from the audience? Are there things that cannot be crowdsourced? And, if we crowdsouce our activities, does that mean we become obsolete? These are difficult questions and there’s no one right answer, I believe. In the end, all the questions about the crowd (and how to define crowdsourcing, etc.) are also questions about us.

And maybe that’s why there’s so much talk, lately.

Previous post:
DOK Delft, inspirational library concepts Next Post:
What would Richard Branson do if he ran a museum?
about the author: Jasper Visser